Programming routes into SkyDemon and AirNavPro on the iPad via email


In my previous post, I described the main steps I follow when planning a VFR flight. As an example, I planned my upcoming route from Prestwick to RAF Leuchars where I'll be exhibiting my Bulldog on the static display in the 2012 Airshow.

In my VFR flight planning, I use a mix of "the old" (map, ruler, etc) and "the new" (automated PLOG computation via iNavCalc, plus other internet resources for NOTAMs, etc., all accessed via my Samsung Galaxy S2 smartphone).

A notable omission from that post was the use of my iPad in the cockpit. I'll cover that topic now.


Like most private pilots these days, I use my GPS device as my primary nav reference on-board. Specifically, I use my (IFR-approved) Garmin GNS 430. Owing to the inconvenience of programming non-standard waypoints on this device, I tend to use the "Direct-To" function between successive major (standard) waypoints to monitor the progress of the flight, and mostly to ensure I avoid controlled airspace. Even when monitoring progress on the Garmin 430,  I fly the nominal headings as prescribed by my pre-planned PLOG (see STEP 2 in previous post), making ad hoc corrections for wind (that differs from the forecast in the PLOG), and making routine visual reference to my physical chart (line on map, STEP 1 in previous post). I also routinely look out the window for the corresponding relevant ground features (it is VFR, after all).

That said, there are some powerful, feature-rich VFR flying apps available on the iPad. Notably, SkyDemon and AirNavPro, which are two of the most popular apps (at least here in the UK and Europe).


...but first, a couple of caveats


I do not use the iPad as a primary nav reference in-flight, owing to the fundamental lack of robustness of the iPad (very much a consumer media device, not a true avionics device). I do, however, use the iPad flying apps for specific functionality that is very handy but not absolutely essential i.e., I can continue flying my route even if my iPad falls over (as it tends to do, every so often).

Also, a non-insignificant consideration is that there is simply no room in my Bulldog cockpit to accommodate my iPad in permanent view throughout the flight. Instead, I have to store it between the seats and take it out to view on occasion.

What I use SkyDemon for

I use SkyDemon on my iPad for the following:

What I use AirNavPro for

I use AirNavPro on my iPad for the following:

Assuming I've already generated my route via iNavCalc's email interface, I will have received an email with the following attachments (as described in detail in the previous post, repeated here for convenience): 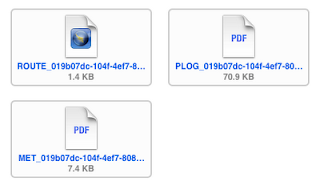 In the previous post, I described in detail the "PLOG_....pdf" and the "MET_...pdf" attachments. I'll now describe the "ROUTE_....gpx" attachment.

As the filename suggest, this is just an XML file (in the open-standard GPX format) which encodes the route.  It is almost trivial to load this file into the iPad using either SkyDemon or AirNavPro. Here's how:

Within the iPad email app, click on the "ROUTE_....gpx" attachment. The GPX content will be displayed in the main window (human-readable XML script), and, moreover, can be "opened in" any supporting installed app (as per the usual iPad functionality for embedded email attachments), as shown below:

Selecting SkyDemon, will load the route as follows: 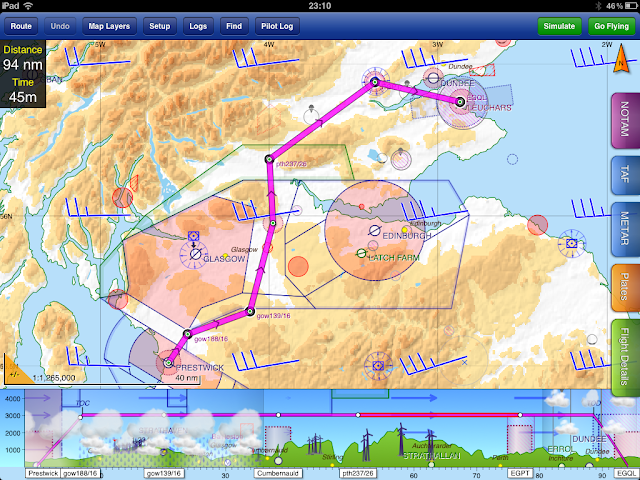 Likewise, selecting AirNavPro, will load the route as follows: 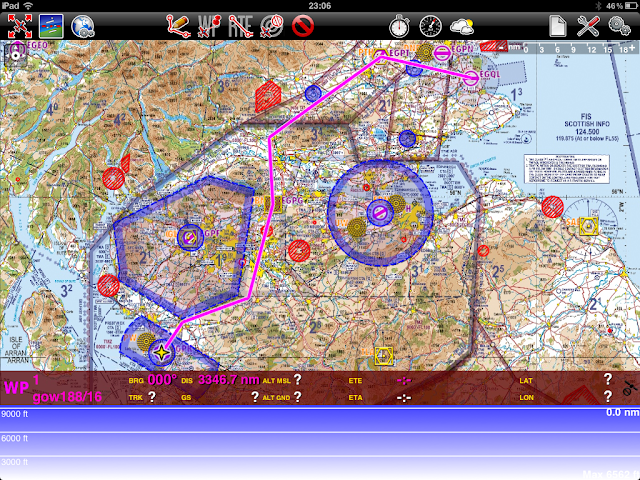 That's really all there is to it !

So, to recap from the start of the previous post to the present:

Starting with a simple iNavCalc email:

I can construct an entire route based on a list of waypoints (specified in a natural manner i.e., reading-off from the line I've drawn on my paper chart), then import the route in to my chosen (GPX-compliant) iPad flying apps in a couple of clicks. Viewed in this way, iNavCalc can be considered as a natural, efficient, shorthand way of creating routes for your favourite iPad flying apps.