Following recent magneto trouble (see my previous post on this), with both magnetos removed from the aircraft, I decided it was a good opportunity to check the function of the ignition switch (see photo below) on my Bulldog. 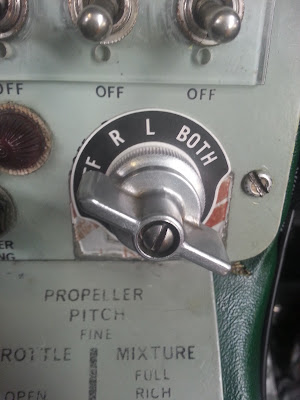 The entire functionality of the ignition switch depends on the "p-leads" which connect the ignition switch to the primary coils (hence the "p") of the left and right magneto, respectively. In a nutshell, a given magneto can be effectively disabled (i.e., "switched off" such that it will not generate a voltage in the spark-plugs) by grounding its primary coil against the magneto housing (thereby preventing a high voltage to be induced in the secondary coil when the points open).

First things first -- check the wiring, especially the insulation and the terminal connectors


If there are any problems with the integrity of the aforementioned wiring, the operability of the ignition switch and the magnetos can be adversely affected. Therefore, the first thing to check is to verify that the wires are in good condition. Importantly, the insulation must not be cracked (which can cause inadvertent grounding -- and disabling of the magneto); and the terminal connectors (crimped "eyelets") must be firmly connected to the wires (otherwise the grounding can fail, and the magnetos will remain live, irrespective of the switch position).

How the ignition switch is meant to work

How to test the ignition switch


Given the expected operation summarised in the table above, it is straightforward to test the ignition switch using an electrical circuit continuity-tester. Most digital multi-meters have such functionality built-in, with an audio setting/mode which makes testing particularly easy: the device emits a steady tone when the circuit between the test probes is complete (resistance approaching zero); and is silent when the circuit is broken (resistance approaching infinity).

In order to perform the tests, the "p-leads" must be disconnected from the magnetos, otherwise the primary coils can be grounded (via the closed breaker points), ignoring any effect of the ignition switch. It is very important to make sure that the aircraft is made safe before performing the tests since as soon as the "p-leads" have been disconnected, the magnetos are live, irrespective of the ignition switch position. The aircraft can be made safe by disconnecting all high tension leads from the spark-plugs. Alternatively, the magnetos can be removed from the aircraft.

Once the aircraft has been made safe, the ignition switch can be tested as follows:


On a positive note, under all conditions which would ordinarily be encountered in flight, the ignition switch had the desired and expected effect (as highlighted in green in the tables above): namely, the magnetos are "live" when they are expected to be live.

However, in the one condition which would not ordinarily be encountered in flight, namely, with the ignition switch in the "Off" position, the effect of the switch was not as expected (as highlighted in red in the tables above): namely, both of  the magnetos are, in fact, "live" when they are intended to be "off". This has obvious safety implications for anyone in proximity of the aircraft when it is on the ground  (e.g., parked in the back of the hangar): if the propeller happens to be turned by hand, the engine could fire. I know I am not the only one who routinely hand-turns the propeller when the ignition switch is "Off": I do it every time I take the aircraft out of the hangar, or put it back in again. I need to turn the propeller "horizontal", out of the way of the mechanical tug I use to move the aircraft on the ground.

What about the "dead-cut" check ?


This check (i.e., momentarily switching the ignition to "Off" while the engine is running on the ground, the point being to verify that indeed the magnetos are no longer live). Some pilots perform this check after every flight. As a rule, I do not since such a check was not part of the RAF checklist for the Bulldog (and that is where I learned to fly, old habits die hard, etc). Also, over the years since, I have been led to believe such a check can actually damage the engine (by causing explosions in the exhaust system ??) --possibly an urban myth, but one that has stuck with me.

In any case, given the precise nature of this failure, it is not clear that a dead-cut check would have actually revealed the problem. Reason: as I noted in the table above, the test suggested intermittent electrical contact when the switch was in the "Off" position. In more detail, what actually happened was that when I wiggled the knob, applying positive pressure with my hand, the circuit would in fact close (on both magnetos), disabling them as intended. However, when in the mechanically-relaxed condition (hand off the knob), the lack of positive pressure would cause the circuits to break (and the magnetos to go live). Since the conventional method of performing the dead-cut check is to momentarily flick the switch to "Off" then back to "Both" again, with one's hand never leaving the knob, manual pressure is constantly applied, and the mechanically-relaxed condition (when the failure actually occurs) is never met throughout the check.

To be clear, there is a check described in Mandatory Airworthiness Directive Bendix AD 76-07-12 (30 August 1977[SB-583]), which must be carried out every 100 hours. The wording therein states "With the engine at normal idle, rotate the switch key or lever through the "OFF" detent to the extreme limit of its travel in the "OFF" direction.". However, in my experience on my aircraft at least, at the behest of the engineer during (typically) the annual inspection, this check has always been carried out by myself (as pilot, which is permitted in accordance with the AD), via the approach for the dead-cut check i.e., momentarily switching to "Off" without taking my hand off the knob. As described above, this does not guarantee that the switch is working correctly.

At the very least, in order to be sure that "Off" means "Off", I therefore suggest that the dead-cut check should be done by actually taking one's hand off the knob when it is in the "Off" position, and verifying that the engine dies (or definitively starts to die, before being recovered by switching the knob before the engine actually stops).

What can be done ?


In accordance with my mantra of "always replace worn parts" (in spite of the fact that this very policy resulted in me recently experiencing a total failure of the right magneto, owing to an assembly defect in the new magneto, see previous post), I went ahead and had the ignition switch replaced with new (see photo below)...Nevertheless, just to be sure that the issue was not due to bad wiring, I did have the tests described above performed all over again on the new switch once installed. Everything functioned as intended, and the issue has therefore been fully resolved on my aircraft.

What about refurbishing the old switch ?


The message here is positive. It turns out that the ignition switch is actually quite a simple electro-mechanical device comprising a pair of spring-loaded metal riders which rotate across metal and/or plastic surfaces to either make or break the circuit (metal-to-metal to complete the circuit when grounding the magneto, and metal-to-plastic to open the circuit, making the magneto live, depending on switch position; one half-track for the left magneto, the other half for the right). Apart from the metal strip contacts, there are no electrical/electronic/circuit components whatsoever inside the switch.

The photo below shows the old switch, opened-up. Although not wholly apparent from the photograph, the track contact surfaces (as well as the metal riders, shown at the bottom of the picture) were covered in "gunk". No too surprising, I suppose, after possibly forty years of service without (I bet) ever being cleaned. After thoroughly cleaning the innards of the switch, reassembling, and re-testing, it worked flawlessly. It is a simple and robust device, and was restored to full functionality with ease. This refurbished switch would of course require authorised approval before installing in a certified aircraft.

Note: this procedure for cleaning the switch is in direct accordance with the manufacturer's documentation, available here. Also described therein is a test procedure materially the same as described above. 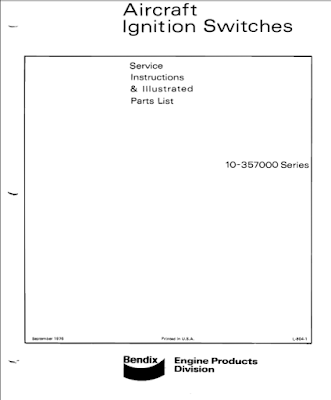 
Here's what I've learned from this experience: