Update: the desktop browser version of the iNavCalc web-app now supports import & export of gpx and fpl files, making it simple to transform between the two formats in any either direction.

Update: with Version 3.0 of the iNavCalc mobile app on Android, you can now import an ".fpl" (or ".gpx") file by clicking on the file (within the Android file-system, e.g., on the SDCARD). Export to ".gpx" (or".fpl") is still carried-out via the iNavCalc email functionality, described below.

I have now added support for Garmin AERA 795/796 (and Garmin 1000) flight-plan files (".fpl" format) to the FlyLogical iNavCalc flight planning email- and web-apps. This allows you to conveniently import/export routes to/from your Garmin device (via the SD card) to your other software tools and devices.

Why did I do this ? Simple: because I own a Garmin 795 and find it to be a fantastic piece of kit. Far better (in terms of usability, system stability, robustness) than the iPad for use in the cockpit environment. All that was missing was a convenient means of sharing my routes with the unit...now solved. See step-by-step examples below.

Usage Example 1: Exporting a route from the Garmin 795 into iNavCalc and beyond

First create and save a route (known as a "flight plan") on the Garmin (refer to the Garmin user guide for instructions on how to do this). The screenshot below shows some example routes in my AERA 795, with the "EGQL-EGSF" route selected in the list (highlighted). We will use this in the export example. 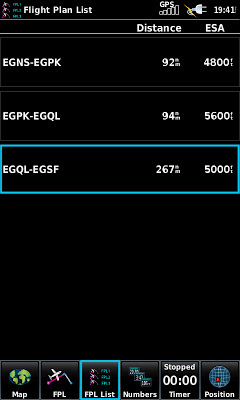 To prepare for export, you need to save the route to the removable SD card in the Garmin (required for all data transfers to/from the Garmin). Make sure you have an SD card inserted in the device, select the desired route for export (as highlighted above, "EGQL-EGSF" in the example) then  press the menu options button on the FPL List page. You will see the following options: 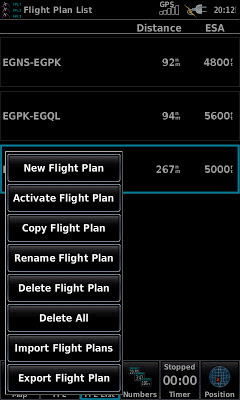 Click "Export Flight Plan" (the last item in the menu). You will receive the following acknowledgement: 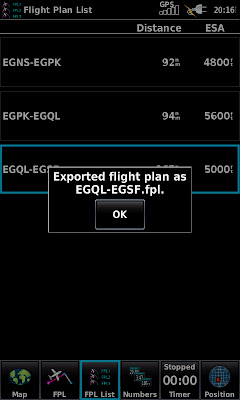 which confirms that the route has been successfully exported on to the SD card, under the file name "EGQL-EGSF.fpl". Click "OK", shut-down the Garmin, remove the SD card, insert it into a PC (via a built-in SD card slot or via a portable USB SD card-reader peripheral), then browse the contents of the SD card. You should see the directory list as follows:

You should see your exported route in the root (top level) of the directory-listing, as highlighted in the above screenshot.

The exported ".fpl" file  is simply an XML file, structured in accordance with Garmin's own "legacy" schema. If interested, you may open the file with a text-editor to review the contents which are human-readable and generally intelligible, but not very useful until transformed. So, the next step is to transform this ".fpl" file into a portable ".gpx" format which can then be used in wide range of third-party software tools and devices.

The FlyLogical iNavCalc app does all the grunt work of transforming the file from ".fpl" into ".gpx". Simply prepare an email to recipient plogs@flylogical.com with the ".fpl" file as an attachment. The subject-line and body of the email can be left blank. The screenshot below shows such an email, ready to be sent.

Send the email. In a few seconds you will receive a response, with four attachments, as shown in screenshot below:

Three of these files are the familiar products delivered by iNavCalc's email-based flight planning calculator. Namely, the "ROUTE_....gpx" file, the "PLOG_....pdf" file, and the "MET_....pdf" file. Of specific interest to the current task is the "ROUTE_...gpx" file which is the transformation of the original ".fpl" file into the open-standard GPX format which is supported by many apps such as, for example, SkyDemon, AirNavPro, Memory-Map, as well, of course, as iNavCalc.

The fourth attachment, the "GARMIN795_...fpl" file, is a new feature in iNavCalc. It is a version of the route,  formatted in the ".fpl" format for ease-of-import to the Garmin device. More on this in the next usage example below.

Usage Example 2: Importing a route into the Garmin 795


Now let's go the other way. Let's create a route outside the Garmin, and import it so it becomes available as a Flight Plan in the 795. For this example, I will create the route using iNavCalcs's email interface which enables you to define the waypoints in a "natural" manner rather than having to pick them from a list or from a map view (as per popular map-centric software utilities such as SkyDemon, AirNavPro, Memory-Map, etc). Specifically, I'll use as an example, the route prepared in my previous post "Flight route-planning the old fashioned-way -- almost...". Simply specify the waypoint ICAO names and/or navaid radials as desired, separated by spaces, on the email subject-line, and send to plogs@flylogical.com:

That's it. A few seconds later, you will receive a response with the following attachments:

For present purposes, the file named "GARMIN795_...fpl" is the one of primary interest. This contains the desired route, encoded in Garmin's ".fpl" format. Simply download the attachment from the email, and save it in the root (top level) location on the Garmin SD card ( via a built-in SD Card slot on your PC or via a portable USB SD card-reader peripheral), as highlighted in the screenshot below:

Now insert the SD Card into the Garmin, power it on, go to "FPL List", select the options menu, and you should see the following list (from before):

Click "Import Flight Plans" (the second-last item in the menu). You will be presented with a list of  ".fpl" files available on the SD card, as follows: 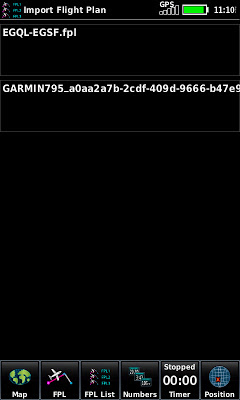 Select the desired entry, in this case the "GARMIN795_a0aa2........fpl". The route will be imported. If successful, you will receive the following acknowledgement: 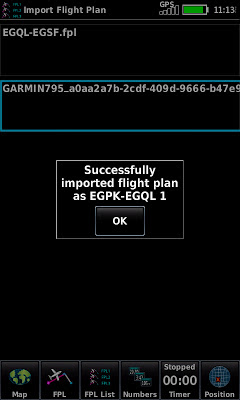 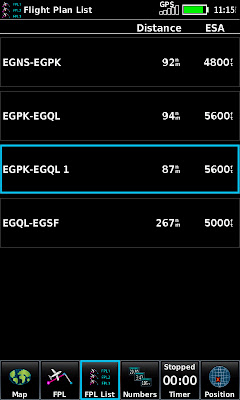 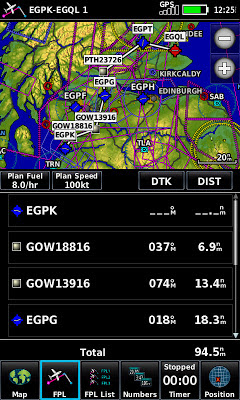 When iNavCalc carries out the conversion from of  the ".gpx" file to the ".fpl" file format:
During the ".fpl" importation process carried out by the Garmin device, the following rules apply:

I've successfully tested the functionality described above on a Garmin AERA 795 with software version 3.0.0 (since this is the device/version I own). I have not tested on any other device or version (e.g., Garmin AERA 796, Garmin 1000 etc), but as long as the same ".fpl" format is supported via SD card media (which I understand to be the case for the Garmin AERA 796 and Garmin 1000), then it should all work fine. If you happen to try on other such devices, please let me know how it works out, and I will update this post to reflect those experiences, accordingly.