It's not what you think: I'm talking about WiFi in my Hangar-- hence HiFi

I needed to get broadband into my hangar at EGNS (Ronaldsway Airport, Isle of Man) and there was no possibility of installing a landline (for ADSL etc). Here's my solution which you may find helpful if faced with a similar challenge:

2) The provider in 1) issued me with a MiFi box: specifically a D-Link DWR-921 router (like this)

3) The router in 2) was easy to set up, but the signal was poor inside the hanger.

4) So I replaced the little paddle antennas provided with the router (see the "paddles" in the pictures at previous link)  with an external antenna, specifically this one.

5) I mounted the antenna on the hangar roof (see photo below). The cables attach directly to the terminals of the router, no extra adapters required.

6) I now routinely get 28 MBPS downlink and 10 MBPS uplink, with no dropouts. Without the external the antenna, performance was a few MBPS downlink at best, and frequent dropouts.

Posted by FlyLogical at 10:56 No comments: 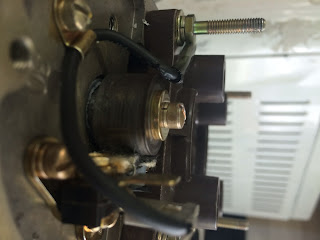 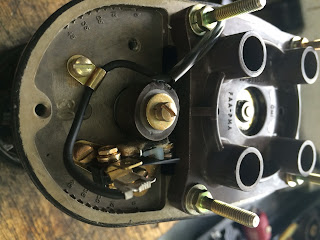 Just returned from a fun trip to Abbeville, France (LFOI), where I attended #BULLCHIPMEET2015, a annual gathering of fellow Bulldog and Chipmunk enthusiasts. The focus of the event is formation flying. Here are some videos from the cockpit of my Bulldog taken during the event:

I've just made it easier for anyone interested in viewing and sharing METAR/TAFs, NOTAMs, and Route (Google) Maps on Twitter. Basically, I've built a simple web-app wrapper around the existing iNavCalc Twitter App. The wrapper does most of the work for you. You can find the app here, and it looks like the screenshot below (usage self-explanatory, especially if you've read this): 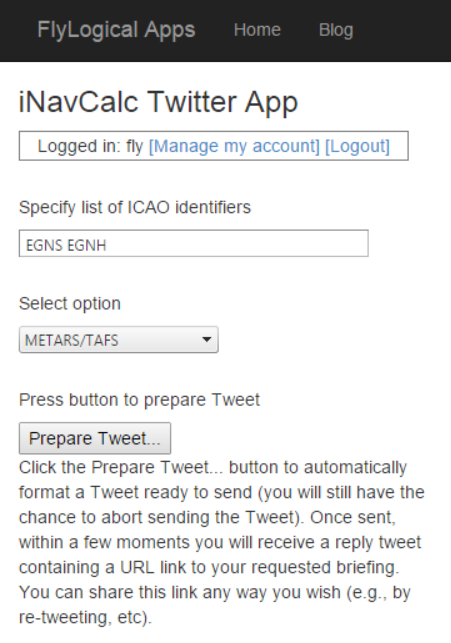 Posted by FlyLogical at 05:08 No comments:

The spreadsheet contains all global airports and navaids currently stored in the FlyLogical database (and as used by the iNavCalc and Really-Simple-Moving-Map suite of apps).

The spreadsheet will be updated automatically (every week or so) via the openAIP crowd-sourced data sets. See my previous post for more on this aspect.

Hope you find the database/spreadsheet interesting and possibly even useful !
Posted by FlyLogical at 08:09 No comments:

I'm pleased to announce that I have recently hooked-up with openAIP.net to provide weekly automated updates to the iNavCalc airport COMMS FREQUENCIES database.

openAIP.net is a free, crowd-sourced resource for global aviation data. I encourage you to register and start contributing.

I was first put on to openAIP.net a couple of months ago by a FlyLogical user who suggested it might be a useful resource to incorporate into iNavCalc.  I wholeheartedly agree, not least since the "official" bodies don't seem to be able to provide such (see my previous rant on the subject), and because the openAIP.net team make it straightforward to consume their global data, from a "machine-to-machine" perspective.

For now, I have only implemented global airport COMMS FREQUENCY automated updates. In future, I will extend to NAVAIDS. Also, the "machine-to-machine" updates lag the openAIP.net website by a number of days, so do not expect to find openAIP.net website updates propagated immediately to iNavCalc. Instead, you will have to wait a week or so for the catchup to occur.

Many thanks to openAIP.net for providing this resource.

Posted by FlyLogical at 04:17 No comments:

Given that the Solar Impulse team published their round-the-world route overview yesterday, I thought it would be interesting to perform some basic navigation calculations based on that.


The total flight distance is 18,814 nautical miles, with a nominal (zero wind) total flight time of 27.5 days to be flown in sections over a few months from late-February/early-March 2015, to late-July/early-August, 2015. The following table summarises the distance along each leg in the route (assuming great circles), and the time taken to fly each leg assuming an airspeed of 35 mph (30.4 knots, 55.6 kph), derived from Solar Impulse 2's performance (which I simply found on the internet, as the published average ground-speed: is there perhaps a more accurate indicated airspeed I could use ?).  Times are given for zero-wind, 10 knot tailwind, and 10 knot headwind, respectively. This gives an idea of the (significant) effect of (moderate) wind on the performance, given the relatively low airspeed compared with conventional powered aircraft. A wind-speed of 10 knots at the cruising altitude of 5,500 feet would be considered as not atypical.

Of particular note (highlighted in the table) is the longest leg of 4408 nm, across the Pacific from Nanjing (China) to Hawaii. Nominally (in zero wind), this would take 6 days, or 9 days in a 10 knot headwind, or 4 days 13 hours in a 10 knot tailwind. Many of the other legs also exceed one day, so the solar cells will need to be able to charge the batteries as well as keep the aircraft flying during the day, and the batteries will need to provide sufficient power to keep flying through the night, multiple times in the mission.

Sunlight is, of course,  the key to Solar Impulses's success. You can use the SunDial function within Really-Simple-Moving-Map to see just how much sunlight Solar Impulse can expect at each point along the route.

For example, here's the Sun track for the starting point in Abu Dhabi, computed for the day I'm writing this post (22 Jan 2015).

This challenge represents an extremely impressive combination of engineering, technical, and human achievement. Very best of luck to the Solar Impulse team. I look forward to following their progress in the coming weeks, and hope they manage to break that next set of world-records in their sights.

...and talking of record-breaking, whilst warming-up in Abu Dhabi, I recommend they try the Formula Rossa roller-coaster, the fastest in the world...had a go at New Year. Breath-taking.

Posted by FlyLogical at 09:04 No comments: