Update 30 May 2018: the models presented here have now been deployed online, as described in the next post.

In this post, I pretty much pick up from where I left off in my previous post where I developed some preliminary Machine Learning (ML) models for weather prediction using MATLAB. In this next post, I explore some further refinements to the models. You will need to read the previous post for context, as I do not repeat any of that here.

All the results of current refinements are presented in the following set of Error Curves which are revised versions of those presented in the previous post. Each of the updates to the curves is described later in this post. 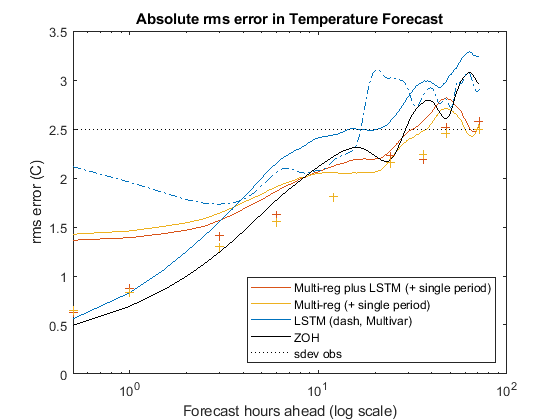 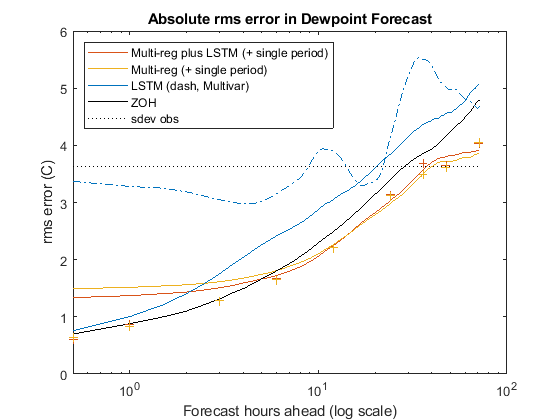 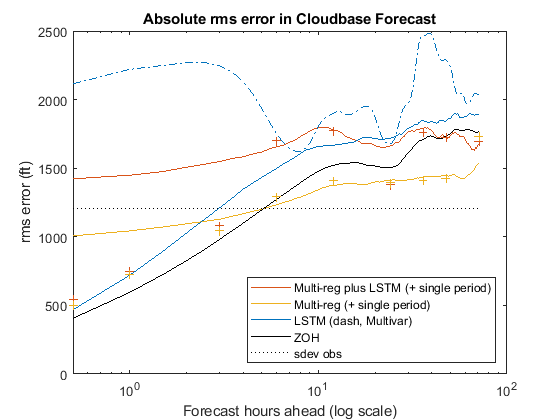 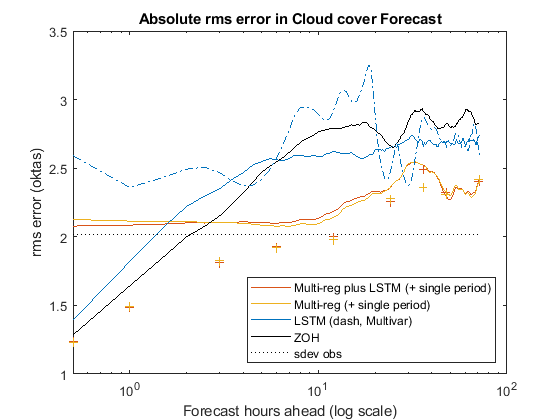 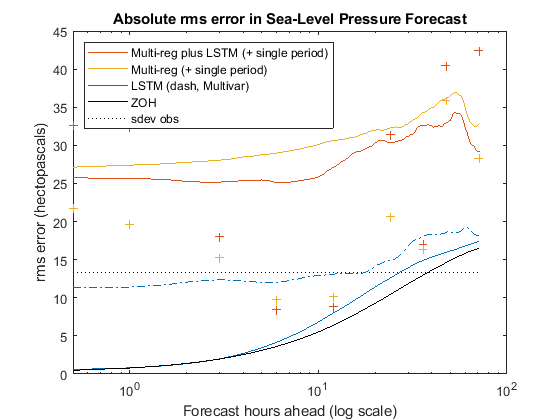 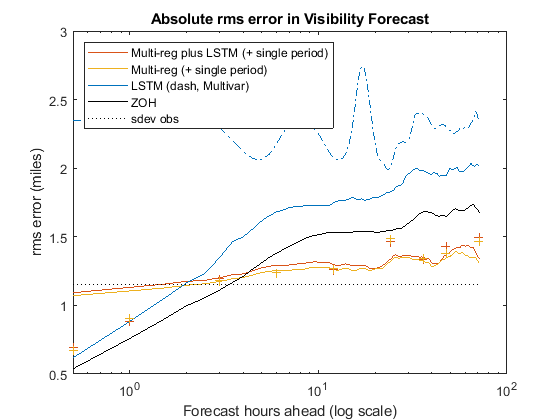 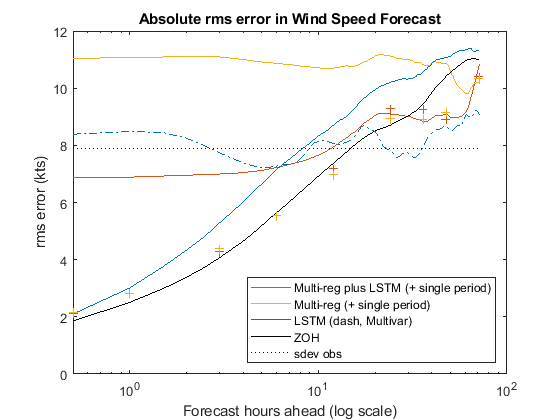 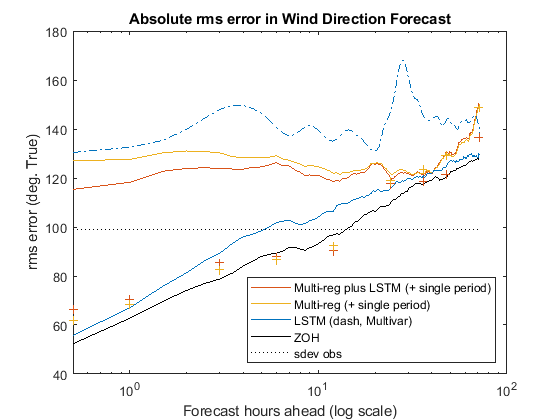 The results from the previous models are reproduced in the Revised Error Curves exactly as they were before, but with slight label changes summarised as follows:

The first of the new models, the most naïve model of all, represented by the solid black curves labelled "ZOH" (for Zero Order Hold), is described as follows: basically, use the last known observed values as the forecast values for the future. It is about the simplest method of forecasting. As the curves show, it works well in the leftmost portions of the graphs, for short forecast periods (half hour, one hour etc), but unsurprisingly, the performance drops off (i.e., curves rise steeply) as the forecast period increases. That said, the (frankly disappointing) realisation is that this naïve model actually performs better than all the previously-presented models up to approximately 5 hours or so, which probably says more about the poor quality of those previous models. Note: the "dips" in the ZOH error at 24, 48, and 72-hours ahead correspond to the fact that local time of the forecast is exactly the same as the local time of the observation used in the ZOH, so diurnal variation will be effectively nulled,  leading to a stronger correlation.

The second of the new models represented by the blue dot-dash curves labelled "(dash, Multivar)" (alongside the previous "LSTM" labels) is a variation of the previous LSTM modelling. Recalling from the previous post, when building the LSTM models, I opted to treat each variable individually, and trained a single-variable LSTM model on the single time-history of observations for each variable. My (albeit nothing more than instinctive) reasoning was that it could be expecting "too much from the model" to try and fit all 8 variables together.  However, I did remark back then that it might be worth trying the multi-variable LSTM i.e., by fitting for 8 variables simultaneously in a single LSTM neural network, just in case there were useful internal correlations that might help. MATLAB makes this extension to multiple variables straightforward, and the results are now in. Unfortunately, with the exception of a few sporadic "dips" (i.e., regions of lower errors), the multivariable LSTM model generally under-performs the previous individual LSTM models. Moreover, it almost exclusively under-performs the naïve ZOH models for every variable across almost the entirety of the forecast periods (validating my original instincts).

Given the above results, the recipe for an online weather predictor for a given location is simplified, as follows:

Over time, one can expect that the predictive capabilities of the Deep Learning networks used in the above-mentioned regressions should improve as the training datasets grow. Moreover, once sufficient data has been gathered to span at least a year, the day-of-year variable (currently omitted, see previous post for the reason why) can be included as a further input (regressor). This will improve the performance by capturing the seasonal effects of the weather (i.e., in addition to the intra-day effects already captured).

This is the next important step and will be explored in a future post.