What is Really Simple Moving Map ?


Really Simple Moving Map (or RSMM for short or #reallysimplemovingmap or #rsmm ) is one or more of the following (see the Limitations section later for a description of what it is not):


RSMM  is easy  to use. Simply load the RSMM URL on your browser. As long as your device Location Services are appropriately configured (see the Gotchas section below), and as long as you have an internet connection (see the Limitations section below), within a few seconds of loading, RSMM will automatically display a map centred on your current location. If you are moving, the map will auto-refresh in order to keep track of your current position. 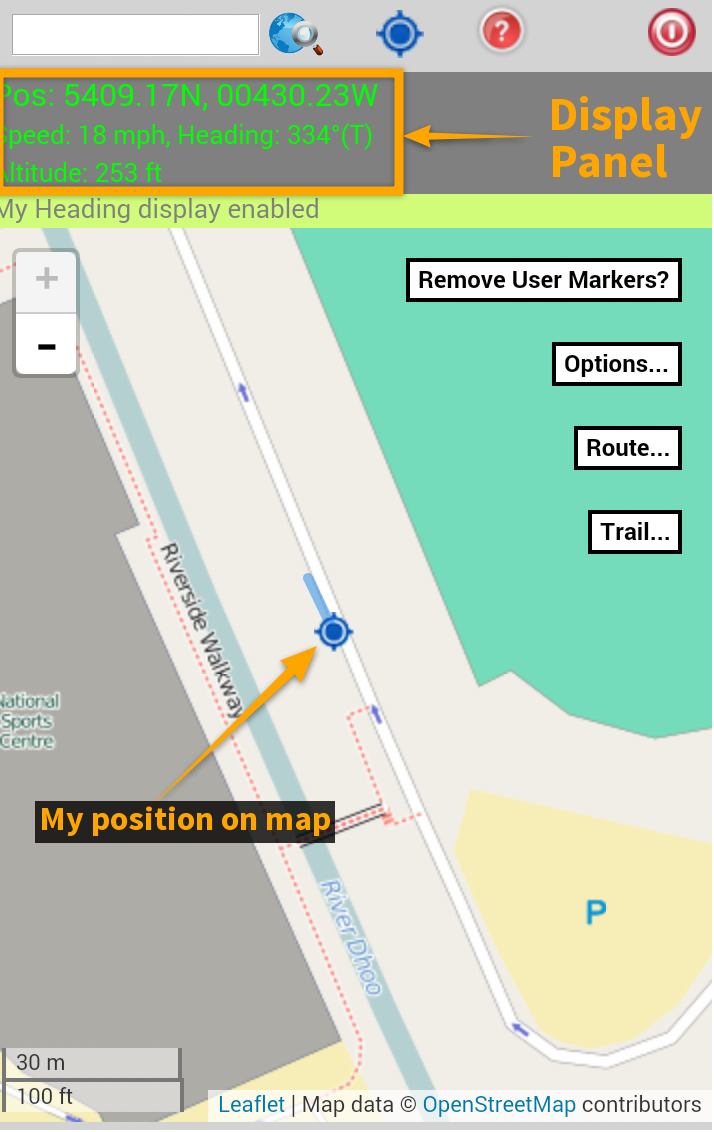 The Display Panel located above the map displays a digital readout of your current position in a  user-selectable coordinate format (via the Options button / menu). If you are moving reasonably quickly -- walking pace or faster -- and if your Location Services have a reasonably decent signal e.g., via GPS rather than just WiFi, then the panel will also display an estimate of your current speed and heading (direction). Likewise, if the Location Services are providing a signal which is sufficiently accurate in three dimensions (GPS is generally required for this), the panel will also display an estimate of your "GPS altitude" (i.e., defined as height above the "reference geoid" -- not taking account of local topographical features). The units for speed and altitude display are user-selectable (via the Options button .menu).

RSMM is "always on". As long as the Location Services are providing a signal of sufficient accuracy, the display will continuously update with your current position, and the map will continuously refresh in order to track your position.  There is no "off button" (or "stop navigating" button as such). However, should you wish to temporarily "pan away" to look at other areas of the map, you can switch off the auto-panning feature of the map by toggling the "auto-pan" button (turning it orange).

When you want the map to follow you again, simply hit the auto-pan" button again (turning it blue). The map will immediately pan back to your current location. During such times when "auto panning" is switched off, the Location Services remain active, so the digital readout of position etc will continuously update (it's just the map auto-motion that is temporarily disabled).

In addition to displaying your current position, you can add additional features to the map, via the Map Layers menu available via the Options... button. For example, selecting the Weather layers allows you to superimpose weather information on the map. The screen shot below shows an example with Clouds, Pressure (isobars), and Rain selected [displaying a depressingly familiar low-pressure weather system centred over the UK (!)]
[UPDATE July 2016: This functionality has been suspended due to the need to support SSL on Google Chrome, pending support for SSL by OpenWeatherMap] 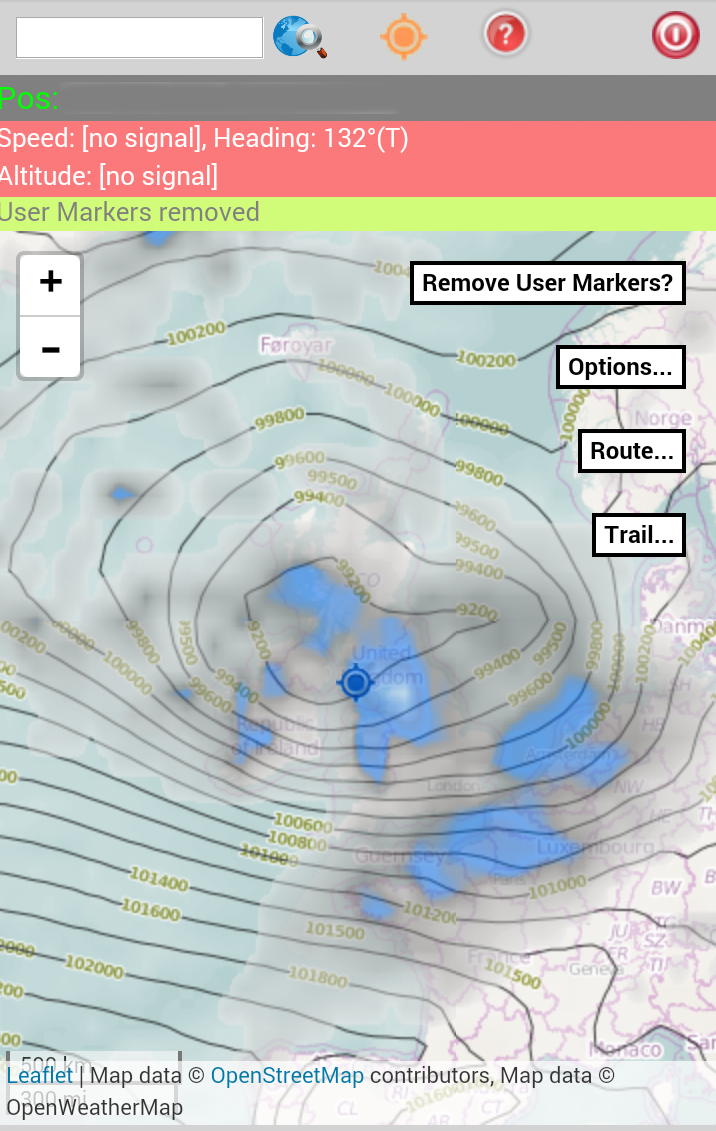 
The cursor which displays your current position on the map can be augmented as follows (via the Options...Navigation menu):


The RSMM Search Controls allow you to find the location of pretty-much anthything, anywhere in the world. Type the desired name-to-search in the search panel, then hit Enter (or tap the Search button). RSMM will attempt a search of the FlyLogical database. This database primarily contains data-points of interest to pilots (since RSMM is inspired by aviation!), but it is also a repository of any waypoints which you have happened to save there (more on that later). In other words, you can use the FlyLogical database to create a library of your own waypoints for convenient re-use.

If the search of the FlyLogical database proves successful, you are given the option to pin a Marker on the map at the location of the successful search. Alternatively you can choose to ignore that search result, which will automatically trigger a more general Google search. Likewise, if the initial search of the FlyLogical database proves unsuccessful, a Google search is then automatically performed.

If the Google search  proves successful, you are given the option to pin a Marker on the map at the location of the successful search. 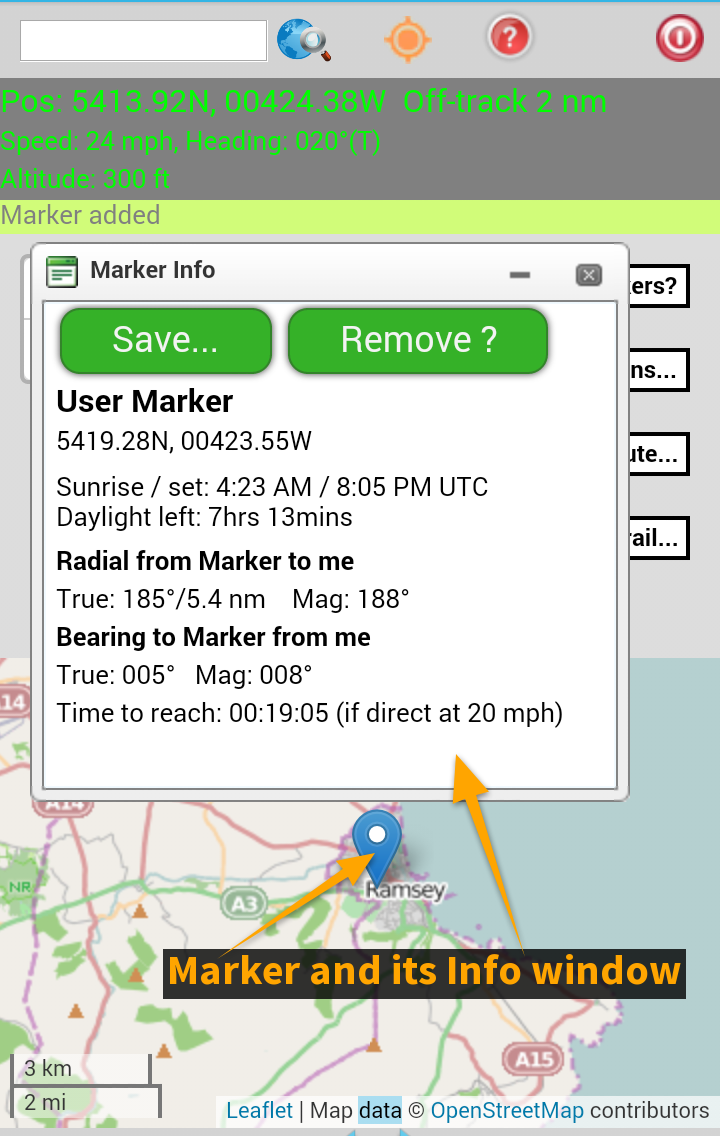 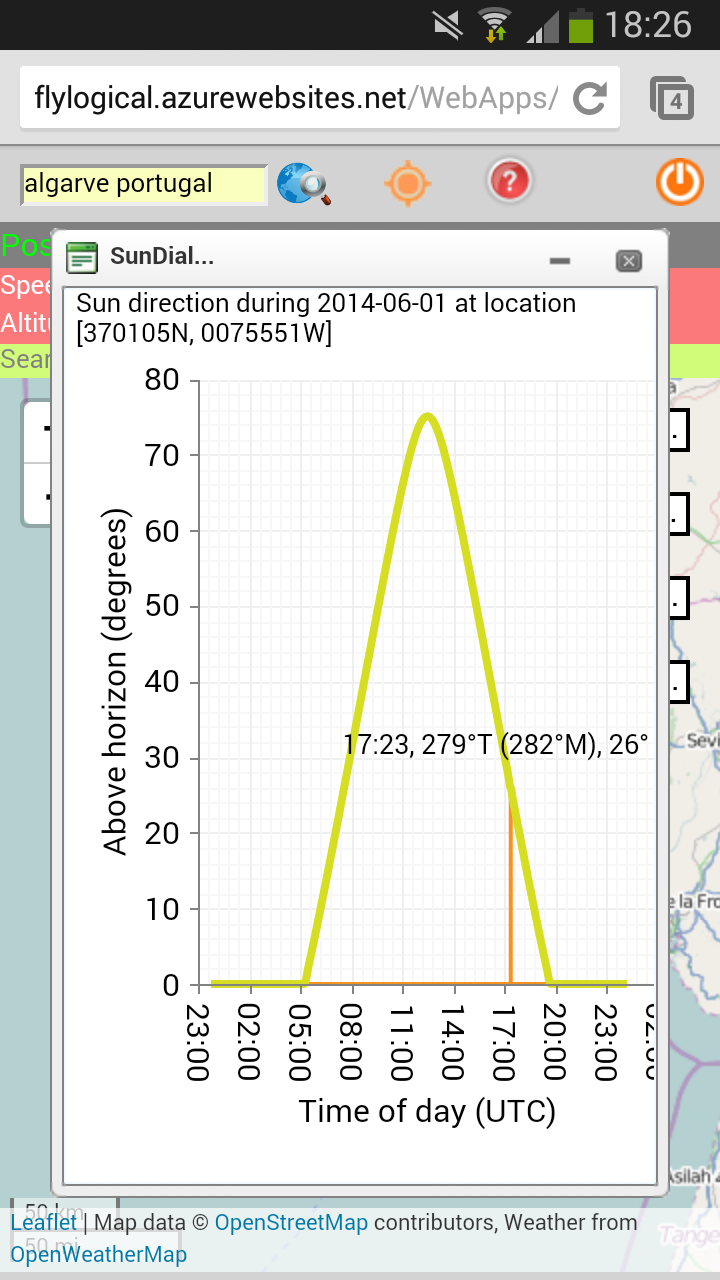 ...which shows the  track of the Sun across the sky today for the selected location. The highlighted value corresponds to the position of the Sun right now (i.e., at the point in time when the Sundial link was initially clicked, then refreshed every minute thereafter). Clicking anywhere on the trajectory shows the Sun position at that point on the trajectory (in terms of time, direction --true and magnetic, & height above horizon), in increments of 5 minutes.


If you have registered with FlyLogical and have logged-in to RSMM (via the login button located top-right of screen), additional information is available in the Marker Info window, as follows: 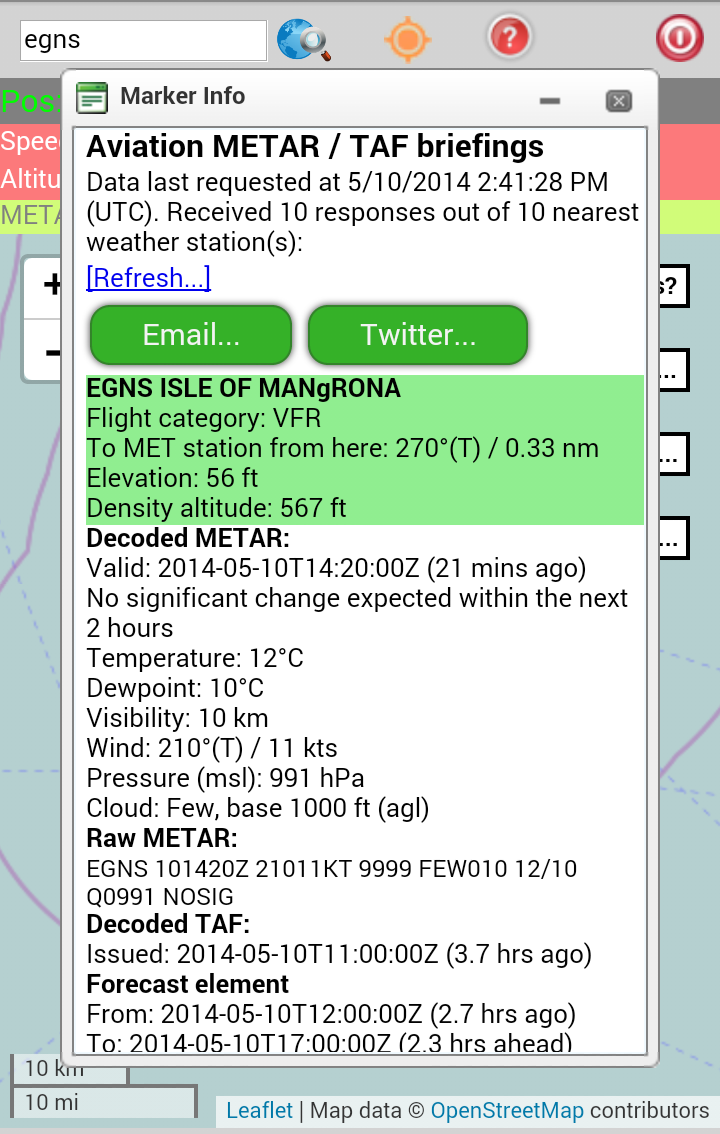 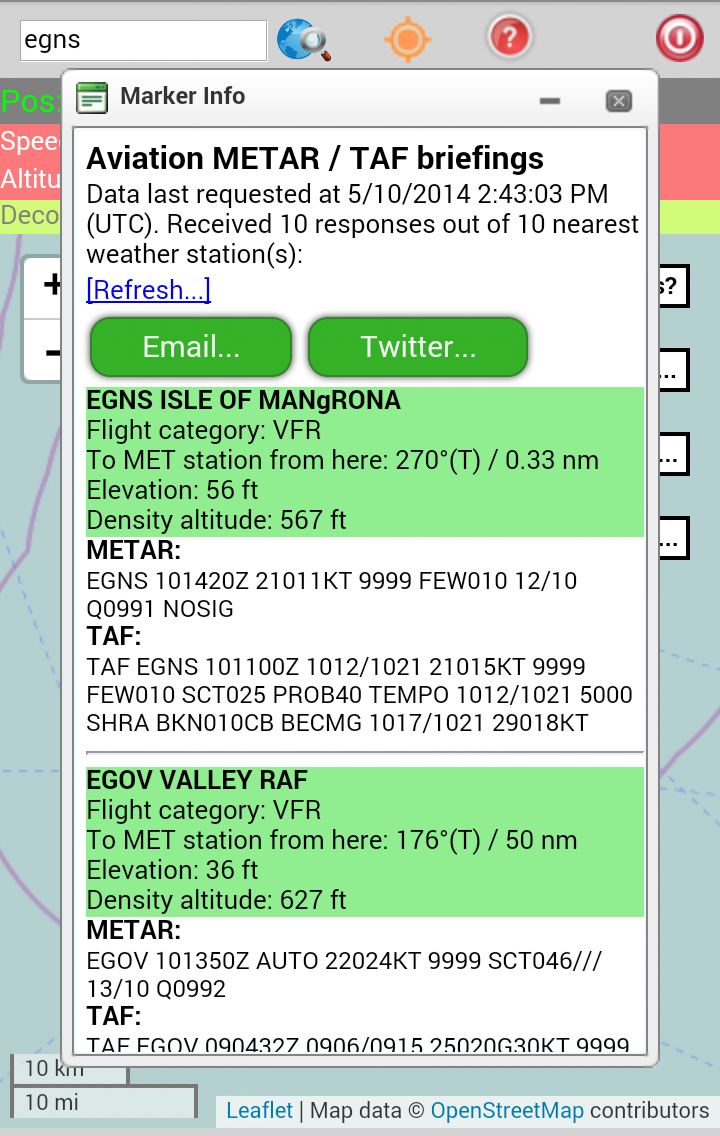 Clicking the Markers button (located top-right on map, note: this used to be labelled Remove User Markers ?) opens a window containing a list of all your User Markers, as illustrated in the screenshot below. 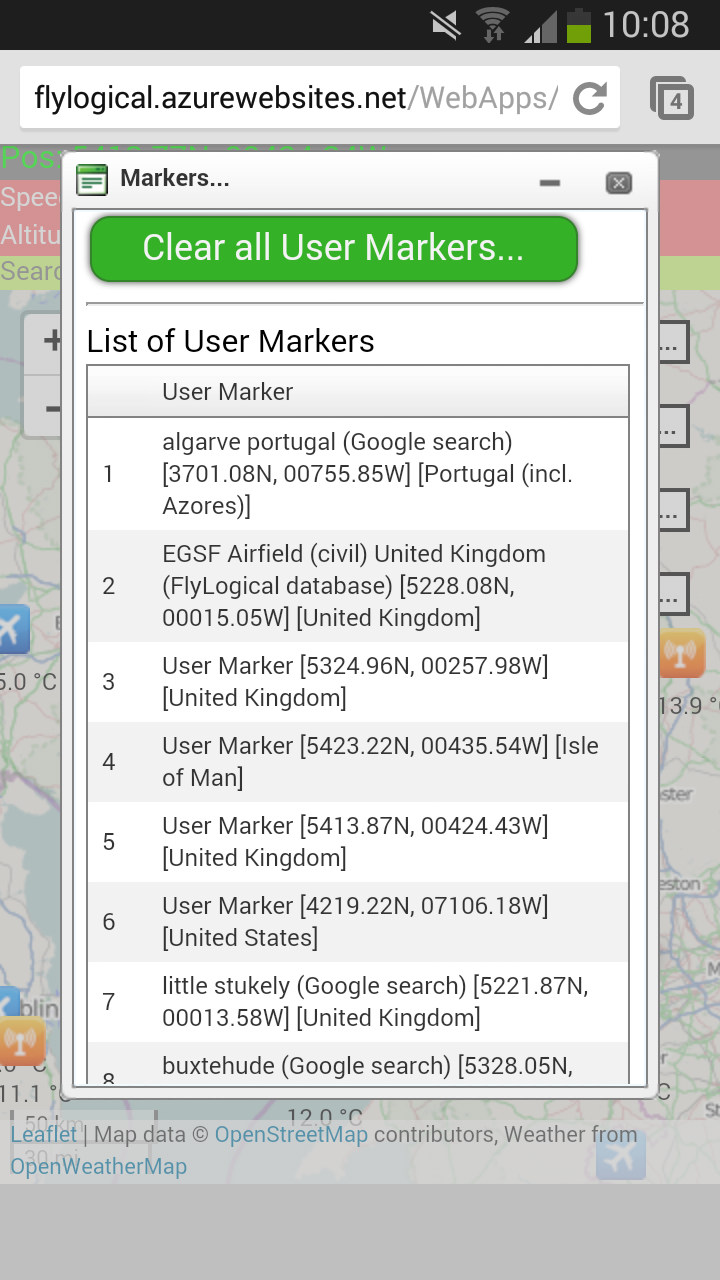 Clicking on any entry gives you the option to pan the map to the given Marker location. The default list ordering has the most recently-created Marker at the top. Clicking on the User Marker heading enables you order the list alphabetically.

The Clear all User Markers button (located above the list) enables you to clear all Markers from the map. Note: this does not delete them from the FlyLogical database if they happen to be saved there.


RSMM allows you to display a route (i.e., a series of connected waypoints) on the map, and monitor your current location and progress relative to that route. Aviation-inspired, the routes assume straight-lines (actually great-circles) between the waypoints. The screenshot below shows an example of a route displayed on the map. 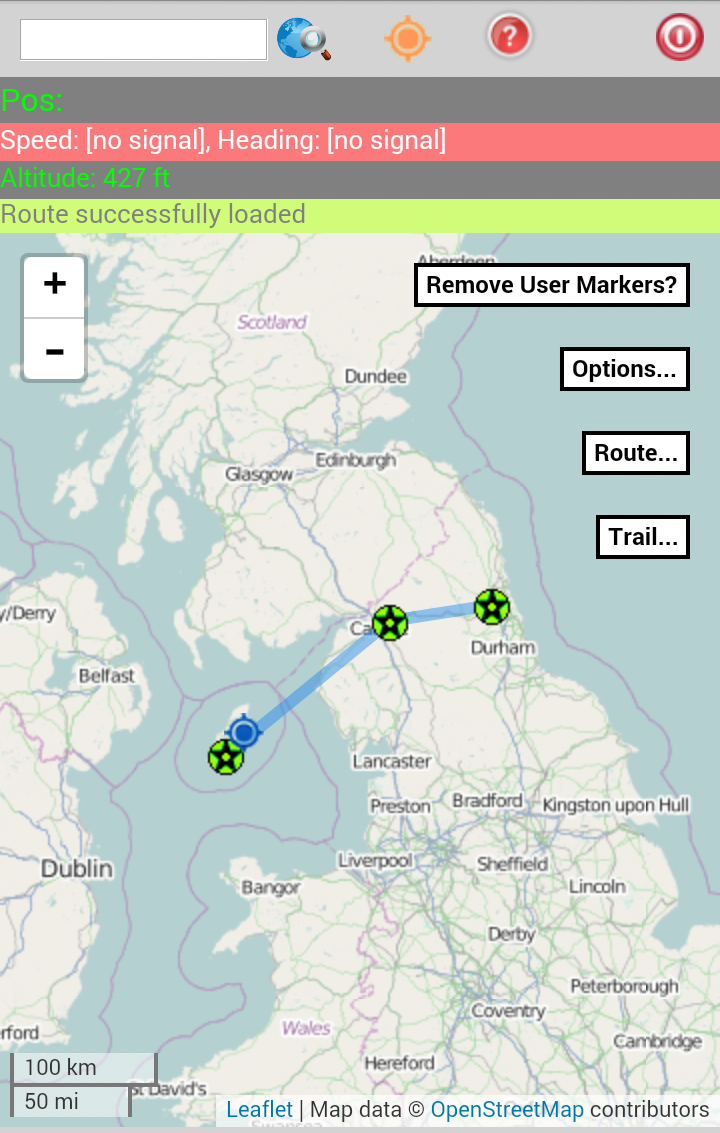 Clicking any segment ("leg") on the route, makes that the "selected leg". It becomes highlighted (in magenta). The shortest distance between the selected segment and your current position is displayed in the main Display Panel as your "Off-track" distance (displayed to the right of your location coordinates). The screenshot below illustrates this. The first leg (of the above route) has been selected, and your off-track distance (of 2 nautical miles, units selectable via Options...) is displayed. 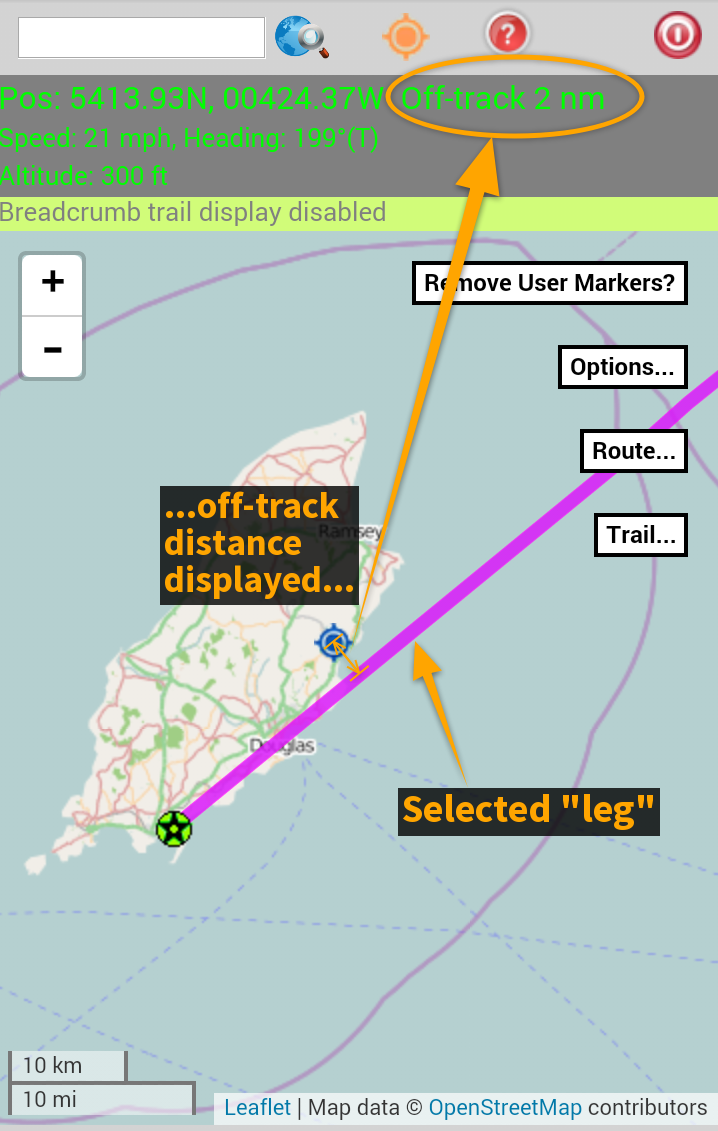 
You can create or import a route into RSMM in a number of different ways via the Route... button (requires login), as follows:


You can export or save a route from RSMM in a number of different ways via the Route... button (requires login), as follows:

RSMM has a simple "breadcrumb trail" feature whereby you can record and display the history of your position (albiet with some caveats, see the Limitations section below). To active the feature, use the Trail... button located on the main map view surface. Within the corresponding popup window, you can toggle the activation status of the trail recording, show/hide the trail on the map, and delete the trail history.

The screenshot below shows an example of the breadcrumb trail displayed on the map (the pink trace behind the location cursor). 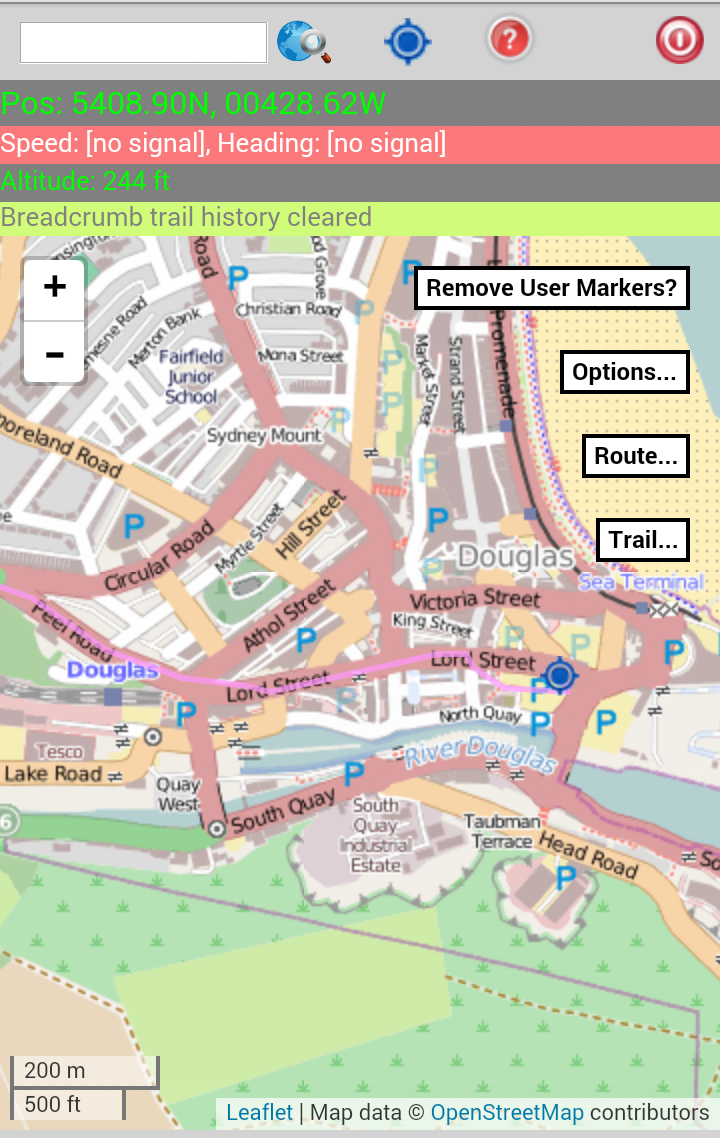 RSMM has not been exhaustively tested  in a formal sense, but the following issues have been noted:


The point to note is that RSMM wholly relies on the HTML5 standard. Not all platforms are compliant with the standard to the same degree. This may -- or may not -- be the explanation for the issues noted. Of course there may be bugs in the RSMM software, but the serious ones would have become apparent on the other platforms (notably Android and iOS) which seem to work well.